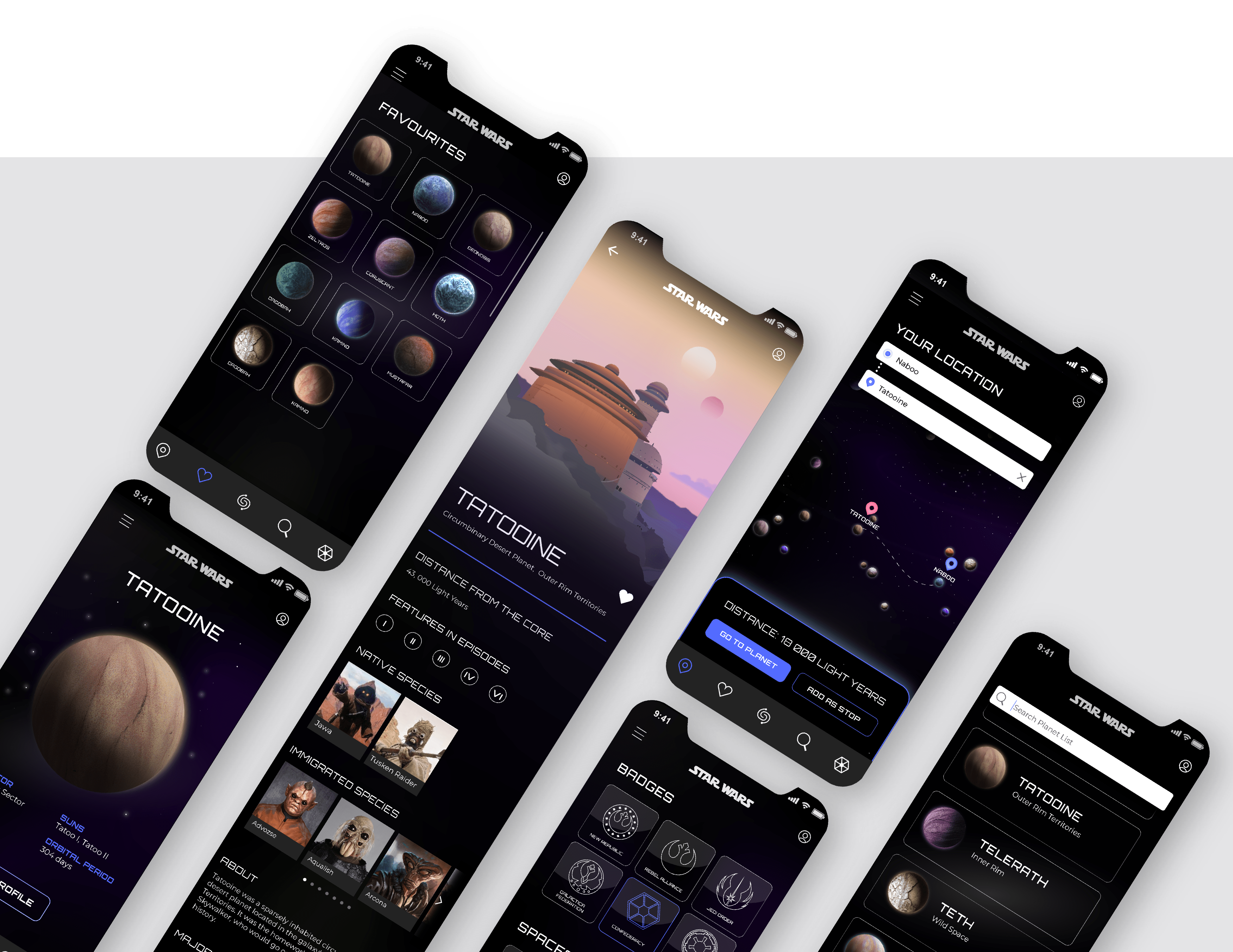 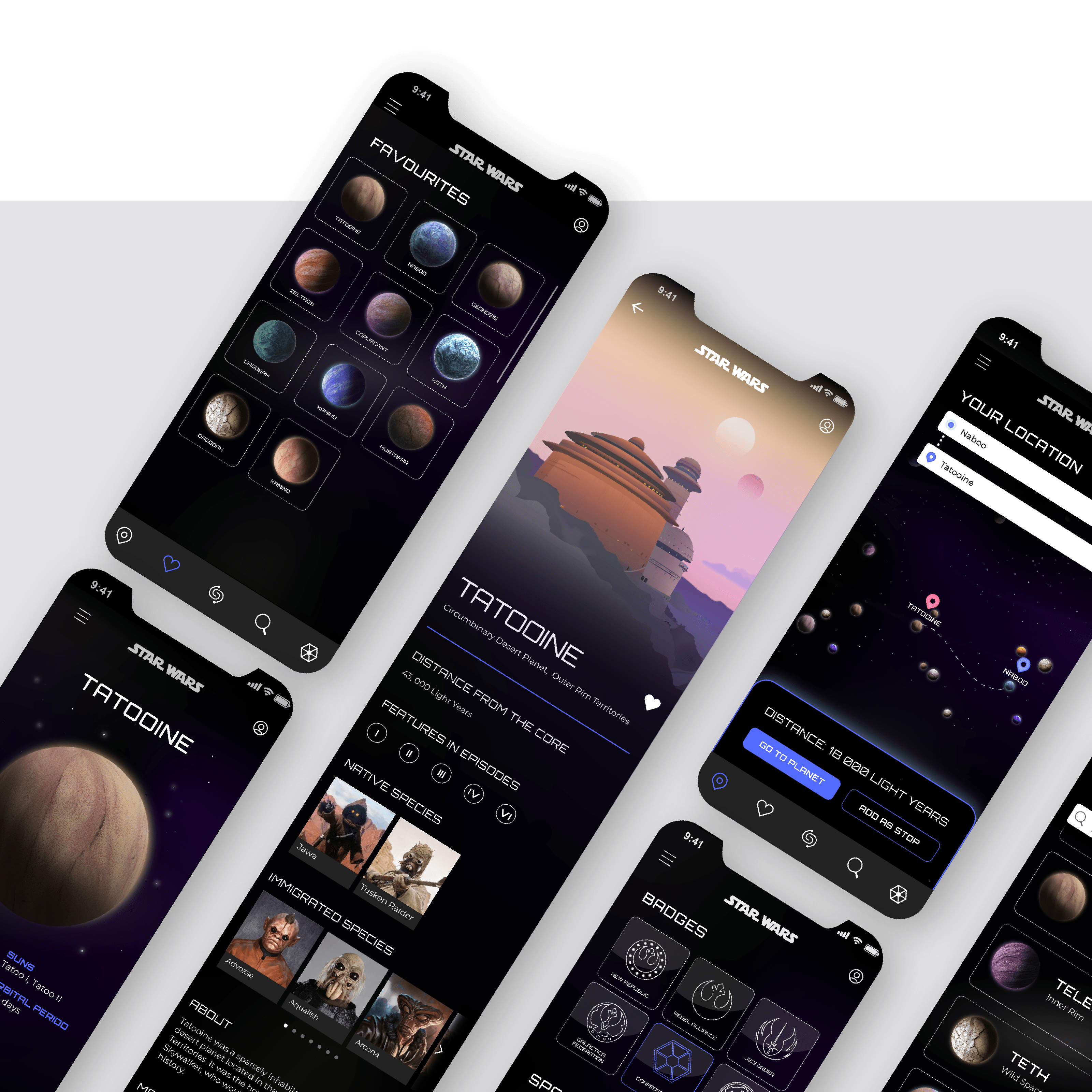 The Galaxy is a Star Wars themed travel app that allows users to explore the galaxy in a virtual 3D space. The goal of the app is to provide a fun and immersive experience for users to travel the galaxy and learn about the planet’s location, orbital periods and terrain.

The Star Wars franchise is growing with new films and series taking viewers to further reaches of the galaxy. This makes it difficult for new viewers and even dedicated fans to keep track of locations and planets.
‍
Wookapedia is a great resource for gathering this sort of information however it doesn’t have the most exciting user experience. My challenge was to create a travel app that would allow users to explore the planets as if they were viewing them live and on screen. This would provide viewers with an engaging and immersive experience.

I have designed a travel app that allows users to find and navigate their way through 3D space. The Galaxy app can be used to find planets, learn about their history, what films they feature in and further background information. It also rewards users for their dedication to learning about the Star Wars Universe by awarding badges and access to spaceship specs as they view more planet profiles, log favourites and calculate the distance journeying between planets.

I looked at leading apps and examples that presented 3D Space such as Google Earth and NASA’s app. I also researched online reviewing resources such as Robert Hodgin's app Planetary. I have included examples below. A large portion of my research was also directed towards the original 6 Star Wars films, Wookapedia and other online Star Wars resources. 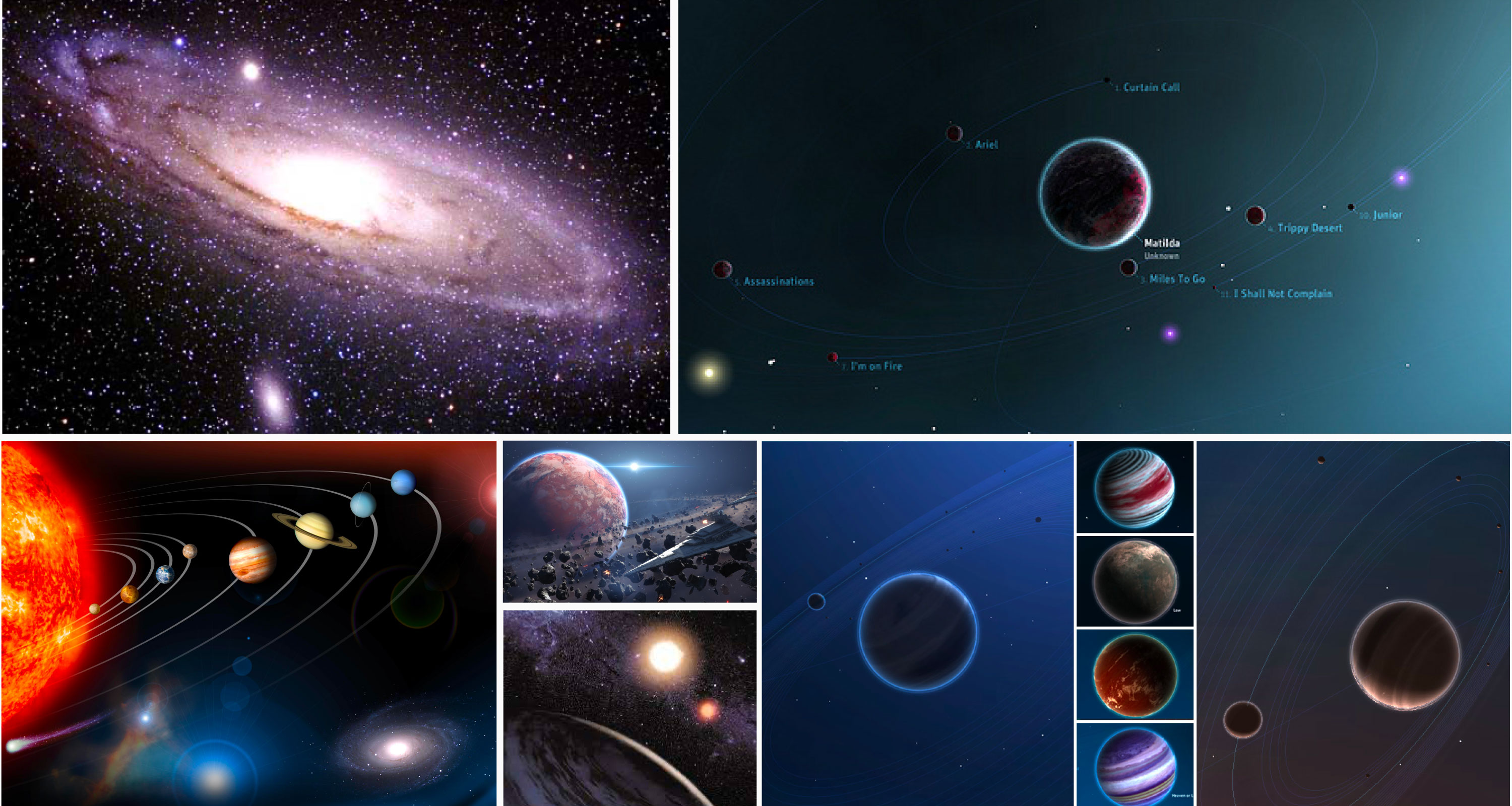 Using my research and discovery I was able to make informed decisions on how best to structure The Galaxy travel app and was then able to experiment with different approaches. 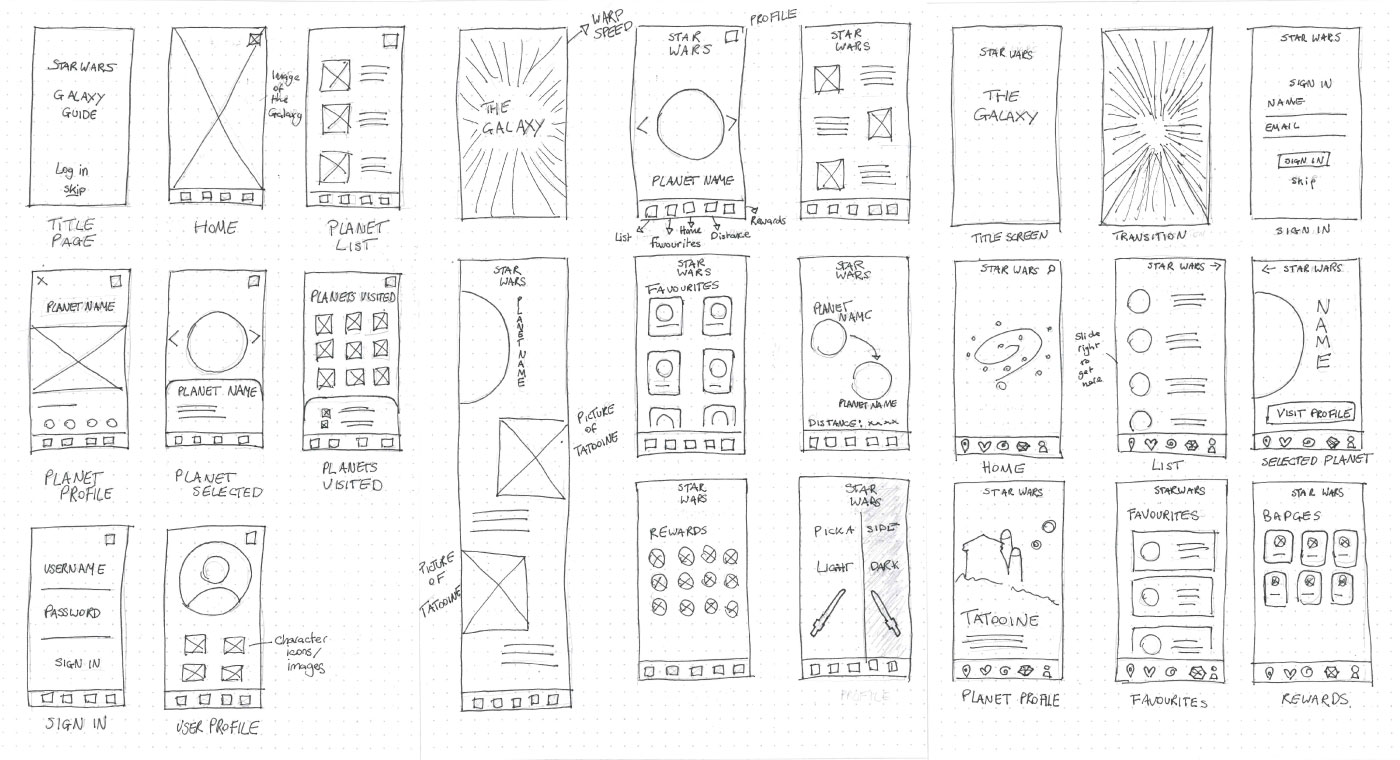 I created wireframes and a site map. This helped me to visualise and simplify the user experience.

Planets were created using Photoshop. I began with flat textured images and used the ellipse tool to crop the image into a circle and spherized through 3D extrusion. I experimented with different ways to create light by using the paintbrush tool, gradients and curves. I was able to create two foundational planets and then change colours and layer them together to produce the rest.

To create the galaxy view I brought the planets into illustrator and arranged them in a swirl. I used multiple gradients to create the surrounding atmosphere and small dots with glows to create stars. I produced the illustration of Jabba’s Palace by copying from an image taken from one of the films and added gradients to the outcome to create a warmer finish.

Icons were first sketched and then drawn up on illustrator. I experimented with different styles and sizes. I chose the best outcomes and then recreated each using a guide to ensure visual consistency across the set. I then placed them in context as a final check for consistency and balance. 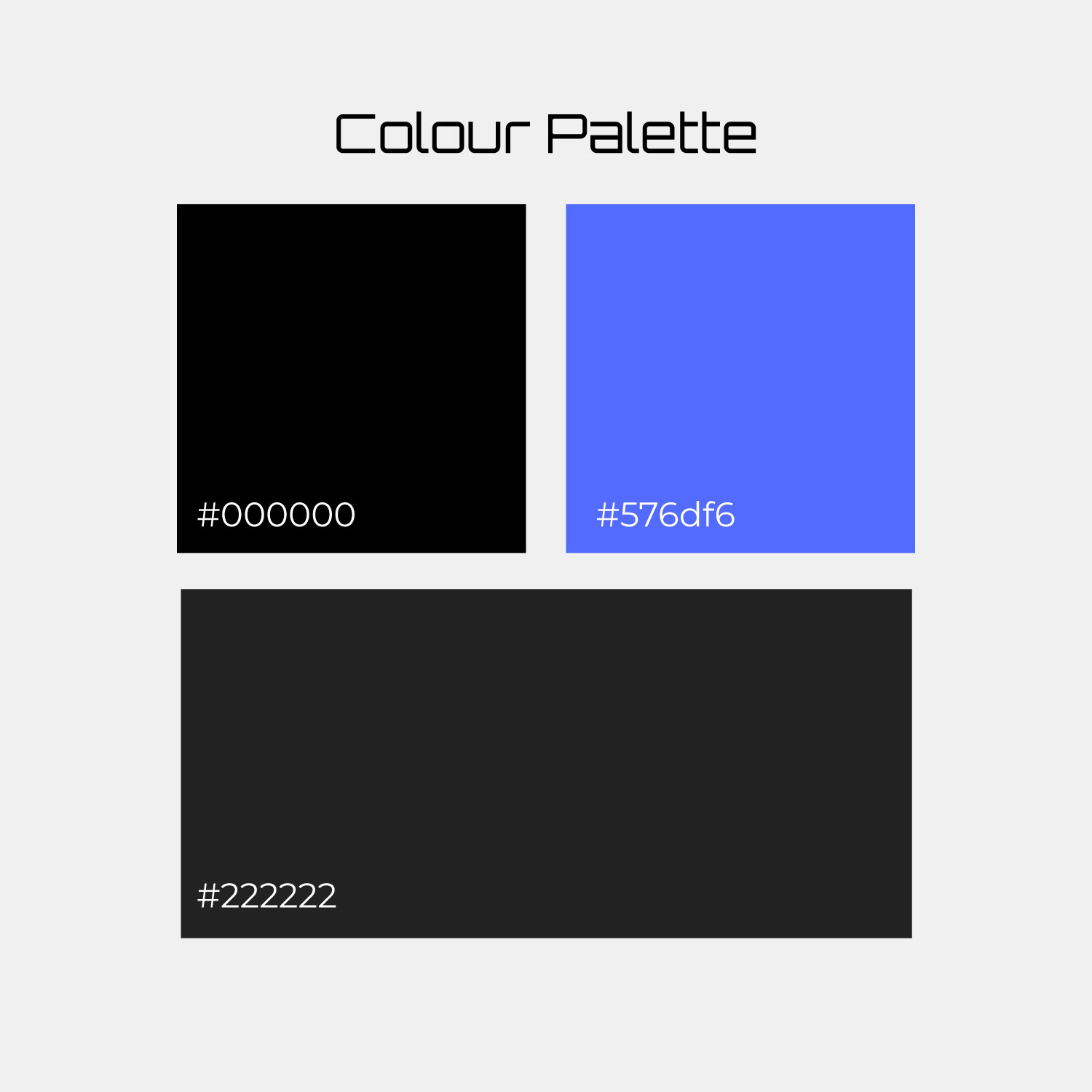 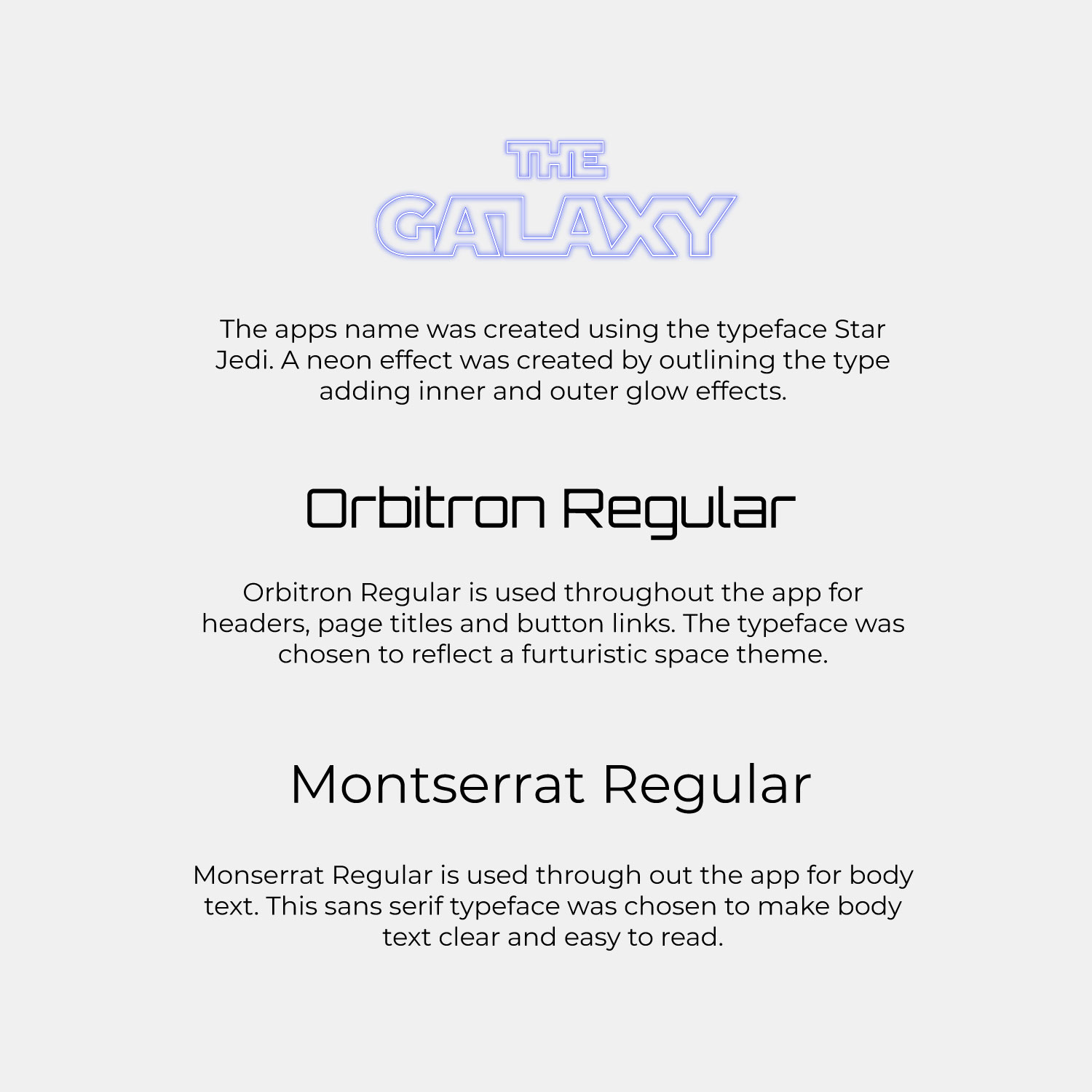 For the app's title, I wanted to create a neon outcome using the Star Wars typeface. I did this on illustrator by outlining the text and adding the glow effect. The typeface Orbintron was used for headings and the typeface Montserrat for body text.

A blue and black colour palette was selected for the app with the potential for a “pick a side” selection that allows users to turn the blue aspects of the user interface red or green. 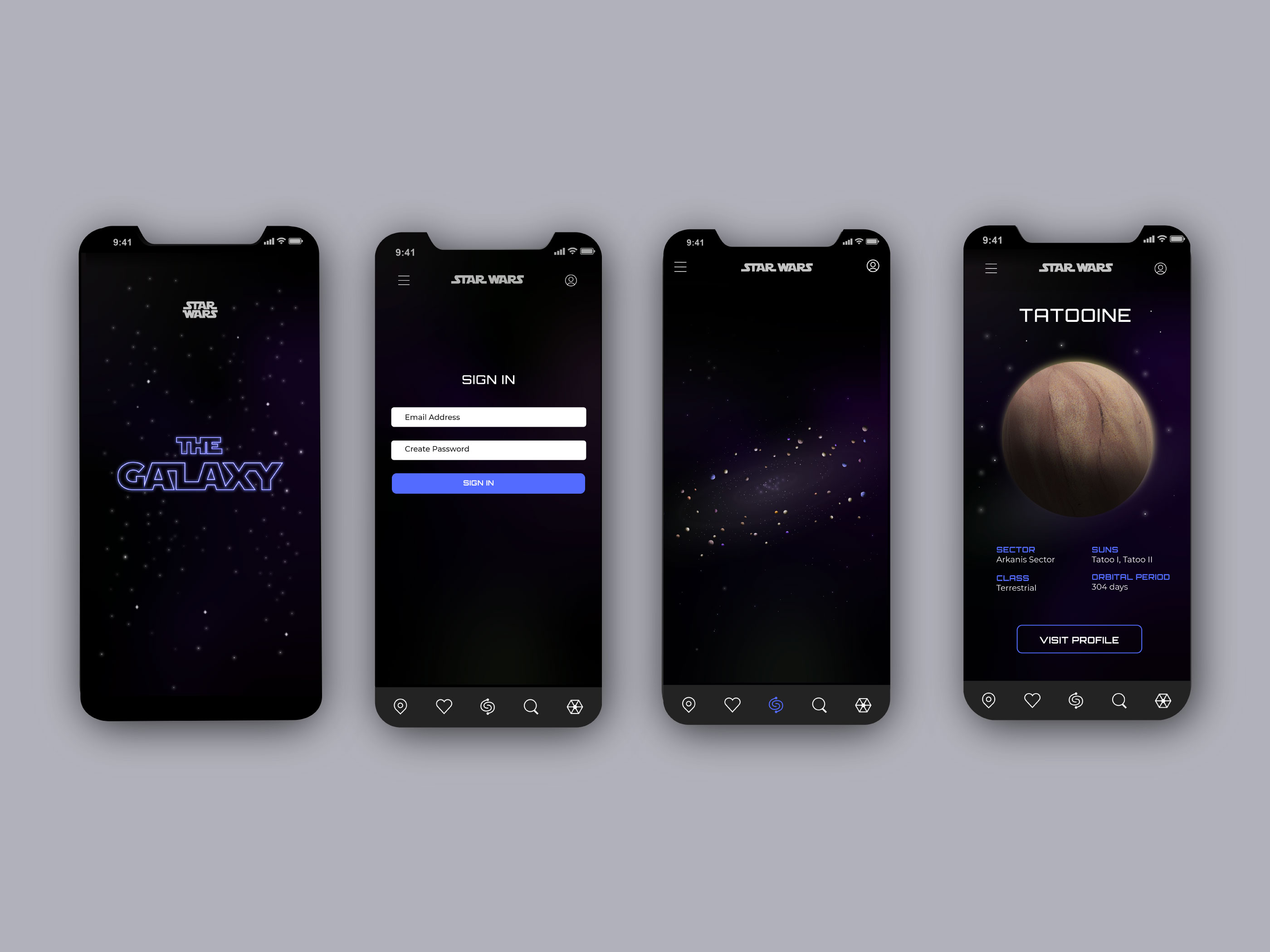 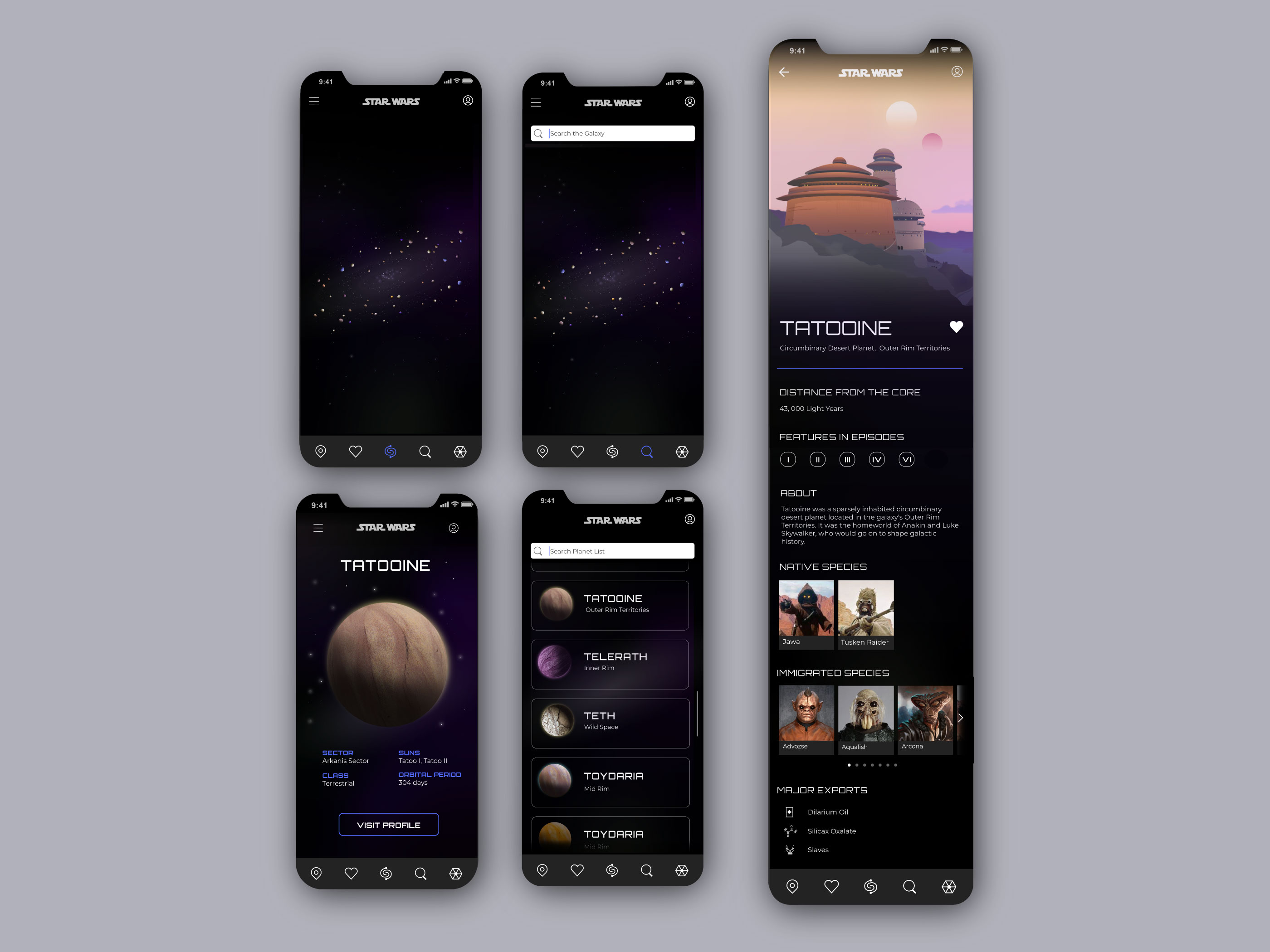 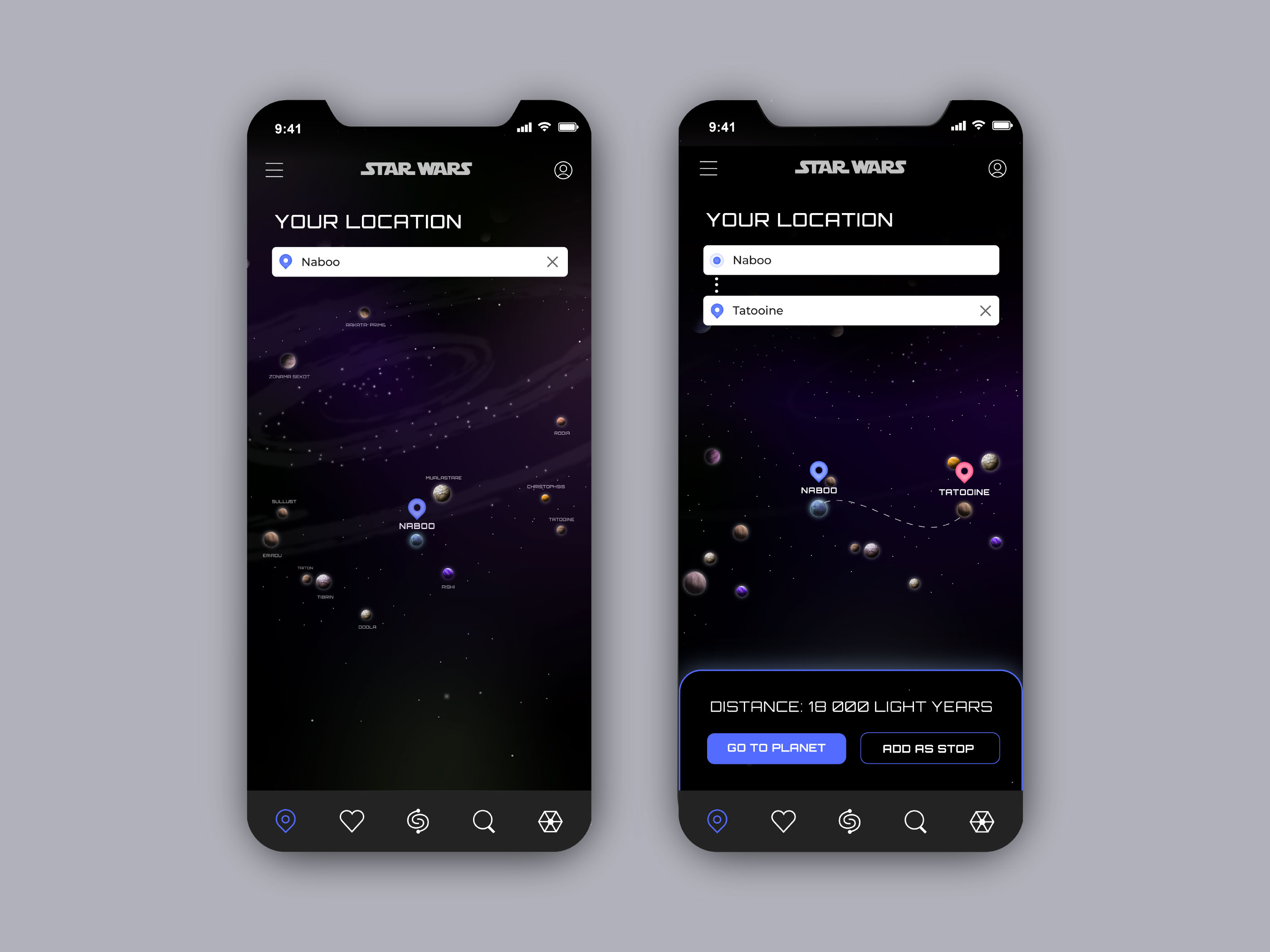 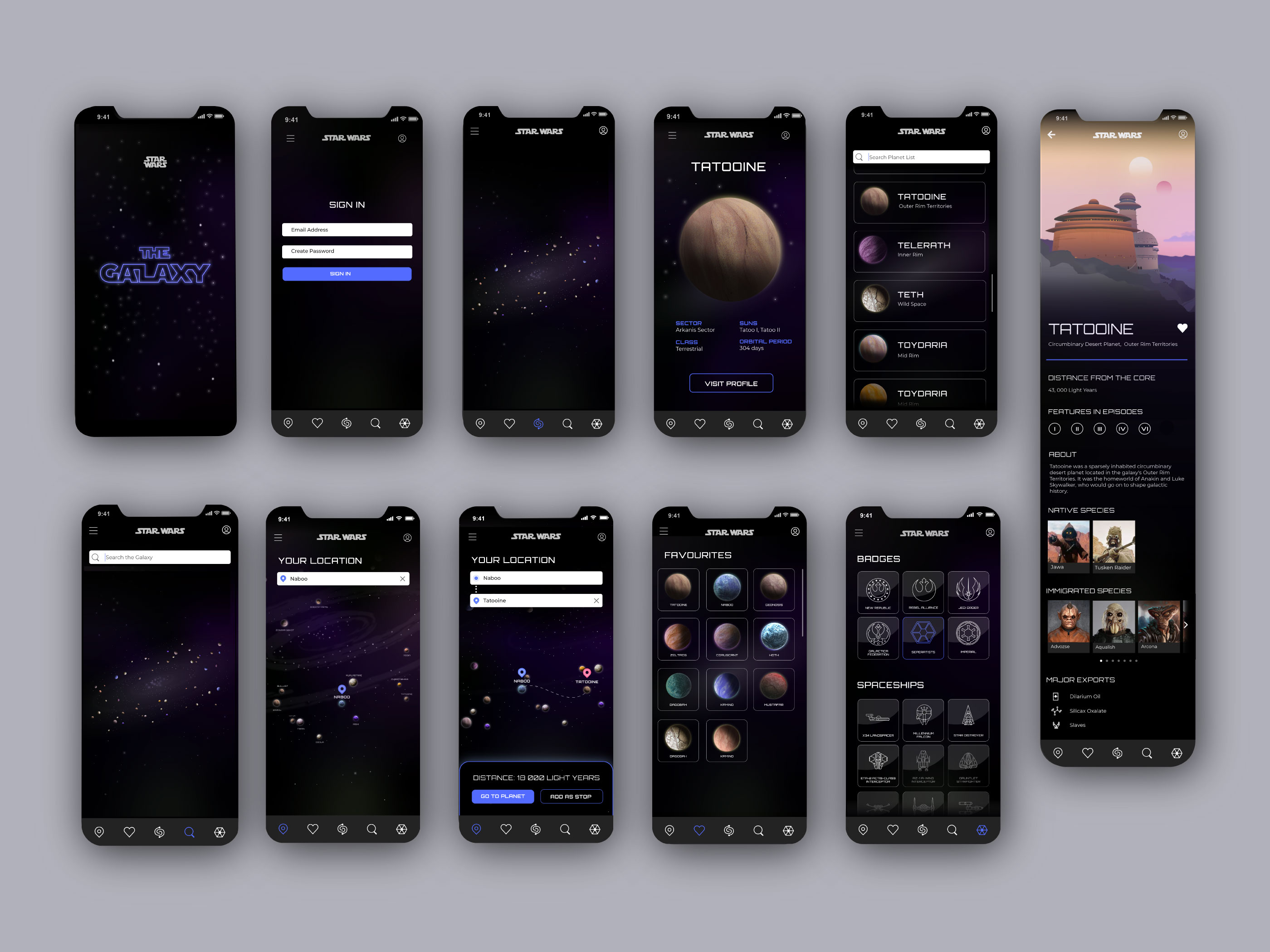 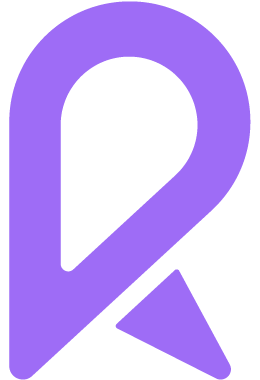